Some Perspective on Study Bibles 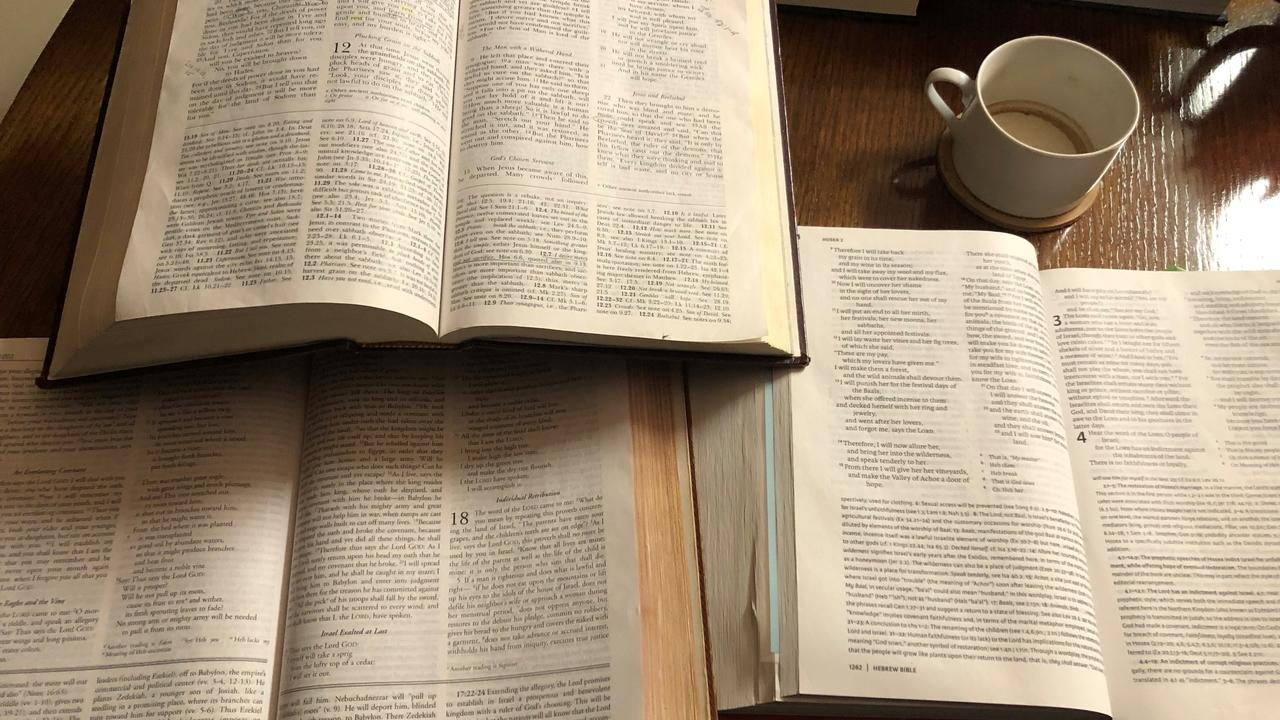 A member of the Sunday School class I teach recently suggested that I do a Spiritual Maturity Project blog on study Bibles.  Here are some I know from personal use:

The New Oxford Annotated Bible.  (The name refers to the publisher.)  It describes itself as an ecumenical study Bible, which I like.  The latest edition is the 5th edition (not the "wouldn't you like to fly in my beautiful balloon" 5th Edition), which I do not know firsthand (This revision is very recent [2018], so I'll be looking into purchasing).   If you look at one of the opening pages, you'll see the list of contributors, which I also like.  You can look up their pedigrees and learn something about them, if you wish.  More importantly, in a study Bible, you're getting a number of viewpoints by various scholars, rather than the single viewpoint of one commentator.  Of course, a big group of scholars can (and do) share particular biases, so a study Bible of this sort may still consistently communicate a specific way of interpreting scripture.

There is a lot of helpful information in the early pages of a Bible of this sort, even before you get to the actual biblical books.  There is usually an introductory essay that explains the interpretive principles used in the production of the study part of the study Bible, as well as translation philosophy.

The Oxford Study Bible has an introduction to each of the major sections of the Bible (e.g. Pentateuch).  Each book has an introduction as well that provides historical background information, major issues associated with the book, and some sort of outline of the book's contents.  It has explanatory comments at the bottom of each page.  At the back of the Bible you will find more essays providing further background information, charts, timetables, and a brief concordance of Bible words and a handful of verses listed where that word shows up.

The HarperCollins Study Bible.  (The name refers to the publisher.)  Like the Oxford Annotated Bible, this one shows you who the editors are, along with all the contributors.  It has introductory material, too, introductions to each book of the Bible, and an article on translation philosophy, etc.  Like the Oxford Bible, it has articles explaining how biblical scholarship works, with all the variety of interpretive approaches.  This study Bible also has maps and charts embedded in the texts of the biblical books themselves, whereas the Oxford Bible puts them all at the back.  If you prefer having a map of the Exodus right there in the book of Exodus, you may prefer the HarperCollins Bible to the Oxford.

Now for the Methodists in the group, I point you to The Wesley Study Bible.  **(Note: This paragraph refers to the New Revised Standard version, published in 2009.  There is a Wesley Bible, New Kings James version, published in 1990, which I have and use.  I want to make sure to avoid confusion, since the names are close.)  You'll find essentially the same kinds of articles and other pieces in this Bible as in the others, with similar section and book introductions as well as footnotes.  The main difference here is the theological bias of the contributors.  All of them (to my knowledge) come from Methodist or Wesleyan background denominations and traditions.  The two general editors, Joel Green and William Willimon, are United Methodist.  So, you get a Wesleyan "take" on some passages of scripture where a Wesleyan view is relevant.   This Bible also has small "application" cutouts scattered throughout the notes.  It's fun for me to look at the list of contributors in this one.  I know a fair number of them and and glad to call them friends.

This next Bible I mention intrigues me, but I do not (yet) know it.  (If you do, leave us a comment for the sake of our edification.)  It's called the NIV Cultural Backgrounds Study Bible.  I definitely like what I see in the description.  Historians, anthropologists, archaeologists, and linguists continue working on the Ancient Near East and Greco-Roman worlds and many interesting discoveries and new forms of understanding have come to light in the past fifty years.  John Walton (Old Testament) and Craig Keener (New Testament) are the general editors, both well-known scholars.  They fit within evangelical Christianity (not the political kind).  In the previous two study Bible examples, some of the contributors likely are evangelical in their convictions, but this Bible, produced by Zondervan (an evangelical publisher) has some basic theological commitments not necessarily found with all the contributors in the other study Bibles.

Since I just opened a can of worms, what do I mean by "evangelical" and why (if at all) does it matter?  In the sense that I mean here, "evangelical" refers to a set of commitments related to the Gospel: God as Trinity, Jesus Christ as fully divine and fully human, Jesus' virgin birth, his atoning death, bodily resurrection, and literal return to earth in glory as Judge at the end of the age.  And here's the biggie: a view of scriptural authority grounded in words like "inspired," "infallible" and "inerrant."  In the case of Walton and Keener, I do not know how they define these terms and how they would describe scriptural authority, but I do know they hold evangelical views.  Walton teaches at Wheaton College and Keener at Asbury Theological Seminary, two well-known evangelical schools.

Keep in mind, evangelical scholars and mainline or ecumenical scholars all got their PhDs from the same institutions.  They often work together on publishing projects and, like any people working in the same profession, see each other at conferences. The differences show up precisely in how to understand inspiration and authority, which can make a difference in interpretive strategies.

What is important to remember is that all scripture scholars, as human beings, have their limitations and are subject to mistake and prejudice, even though all of them are reputable scholars, well-known in their fields and very careful and meticulous about their work.  The majority of scholars in more mainline or ecumenical traditions are themselves serious Christians, so there is often overlap in viewpoints on specific matters with evangelical scholars, even if they differ or disagree on other parts.  Serious readers of the Bible can benefit from all of them.  As responsible students of scripture, we read them all.

To summarize: any of the study Bibles I've mentioned so far follow similar formats, except, in one case the Cultural Backgrounds Study Bible.  It appears that the notes come from the two editors.  The other Bibles have lists of contributors, which I think is generally a strong point.  All these Bibles will have lots of good background information and explanatory comments that help us understand the texts.  They do not replace our own study and engagement, however.  The final goal of Bible reading and study is for us to hear God's address to us in our day.  These scholars assist us in that work.

I have used the Thompson Chain Reference, but it has been a long time.  However, it includes much of what the other study Bibles that I have mentioned do.  The big difference is the chain system.  Rather than a lot of commentary in footnotes, you get topical or theme words, with links to all the other scriptures where that term appears, hence "chain."  This Bible has the advantage of helping with what I'll call word association, which is one important aspect of learning to read the Bible well.

Zondervan also publishes a Biblical Theology Study Bible.  I recognize a couple of the scholars (D.A. Carson and Douglas Moo).  Again, they are well-known, reputable scholars.  You may want to take a closer look at this one, but I don't know it.

Nowadays, unfortunately, some study Bibles are geared to consumer interest based on market demographics, such as age or gender or some other identifying feature.  You can find Men's Study Bibles, Women's Study Bibles, etc.  They often have some of the same background material I've mentioned earlier, but they also include a lot of stuff purportedly relevant to the particular reference group.  I admit, I don't care for this approach, although, if you use one and you find help, far be it from me to judge.  We just need to remember (1) not everything that gets identified as relevant for women or for men is just for women or for men, and (2) we should pay attention to the implications of study Bibles geared to market segments.  I suppose that is another way of saying what I said in #1, with the addition of the awareness of study Bibles based on consumer interests.

Finally, I offer a few suggestions about study helps beyond the study Bibles.  I recommend (1) a good Bible dictionary or "companion" (e.g. the Oxford Companion to the Bible) or (2) compendium-type books on cultural and historical background.  They are many and varied.  InterVarsity Press has a nice series: Dictionary of Jesus and the Gospels, Dictionary of Paul and His Letters, and Dictionary of the Later New Testament.   There are many options and I encourage you to browse and decide.

It sounds like I'm asking you to spend a lot of money.  I am asking you to consider spending some.  In the grand scheme of things, if we want to be serious students of the Bible, we need to spend some money, or convince our churches to spend some money and make these resources available in the church library.  If we think it's too much, it might help if we thought about how much we spend on other things.  That usually helps to put things in perspective.

You will also notice that I have said nothing about digital resources, mainly because I'm an old Luddite.  However, the two I know something about are Accordance Bible Software and Logos Bible Software.  In each case there are levels that you can buy, from free to very expensive, depending on how much access you want to other resources.  This is one of the reasons I resist this kind of software.  It feels a little bit like how cable TV sets up their pricing plans.  Just my personal bias.  I have friends who use these digital resources virtually exclusively and swear by them.

I hope your "takeaway" from this lengthy entry is the inspiration to read the Bible in big portions and to use helps that strengthen your facility in reading.  The world needs many more serious Bible readers.  May this tribe grow.

Get notified about new Pressing On posts >> 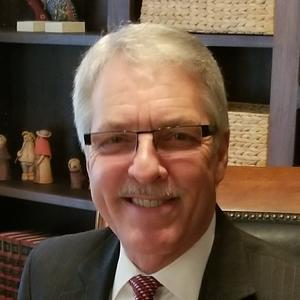 Stephen is the full-time director of the Spiritual Maturity Project after having spent 40 years in higher education and pastoral and college campus ministry. He has a Ph.D. in religious studies and also blogs at stephenrankin.com